Cyd Smillie of Arts Alive Chicago contacted me to let me know she had some summer interns available for immediate work and as such Cyd had planned to utilize them to get an early jump on scraping the wall yesterday.

Cyd managed these hard working young ladies so well that by mid-morning they had not only scrapped the wall but also had hand scrubbed it with water and TSP cleaner (human power washers) .

Cyd called me and we discussed capitalizing on the “gal power” she had on site and proceeded with priming.

I made a run over to the paint store to buy primer and supplies and delivered them on site.

I contacted Jerry Rogowski and informed him we are jumping ahead and priming at the wall.

Jerry met me on site after he wrapped up work and as it became apparent the gals were doing fine with priming and would probably finish in a bit, so he and I turned our attention to spending our time there installing and chalking the drip edge.

The volunteers Cyd had on site finished priming around 1:30 or so and were released. These girls worked extremely hard and achieved a bunch in their time spent at the wall.

A big thank you to Alexandra Sobor, Sammy DiGiacomo, Izabella Nepomuceno, Katie Scanlan, Karina Montalvo, Annabel Spranger, Zoe Prell and Ewelina Mikocewicz for their incredible effort and hard work. What these young ladies did will serve as the foundation for transforming this site.

Cyd deserves tons of credit for managing and organizing them to get the entire wall scraped, washed and primed.

Cyd took a much deserved break while Jerry and I focused on the drip edge install.

After working all day Jerry without a fuss stayed up on a scaffold and got the entire length of drip edge not only installed but also sealed with silicone. If you ever had to use a hammer drill to drill into concrete you will know this is no small task and I bet Jerry’s arms are still vibrating and shaking.

As we proceeded to install the drip edge we also painted the conduit with an oil based primer to aide in the prevention of rust from dripping down the future mural. This same special primer was used in the one area of the wall that was severely water damaged and required the most scraping.

Cyd returned from her break as Jerry and I were nearing the end of the drip edge install which we finished around 6:30.

After surveying where we were and deterring how far ahead we were, we decided to push a bit further and test out projecting the artwork of one of the panels on the wall to see if that solution would work and eliminate the need for us to grid out such a complex pattern,

We agreed to break until the sun dipped so our projection had the best chance of success. I hurried home to prep the digital files and gather the proper equipment.

Jerry, Cyd and I met at the site at 9:00 to conduct our test. After some set-up and a quick visit from Addison and Avondale Mural and Garden Committee Member Cesareo Moreno and his son we had our set-up going and quickly sketched out the first panel.

Seeing as it was successful and we had all the equipment on site we elected to keep going.

Daniel Pogorzelski came by and graciously brought along some water and cake and was helpful in that he kept an eye on our projector and computer set up from across the street freeing us to concentrate on projecting sketching.

Jerry stayed until 11:30 and had to leave as he had work in the morning at that point we had 6 panels done of the mural done.

I was running on fumes but Cyd dug deep and kept pushing. I ran home to get another power supply and some safety saw horses as we had to move the projector set-up onto the street to get the panels closer to Avondale sketched out.

At around 2 AM we had the entire wall sketched out (sans the panel facing the expressway exit). Daniel stuck around the whole time and helped us pack up.

In short, due to the incredible effort of Cyd and her Arts Alive Crew along with Jerry (and aide of Daniel) tasks that normally take 5-7 days were done in one day and right now we are at the point were our next task is painting.

Big kudos and applause to Cyd and Jerry for their incredible contribution to the mural’s progression. 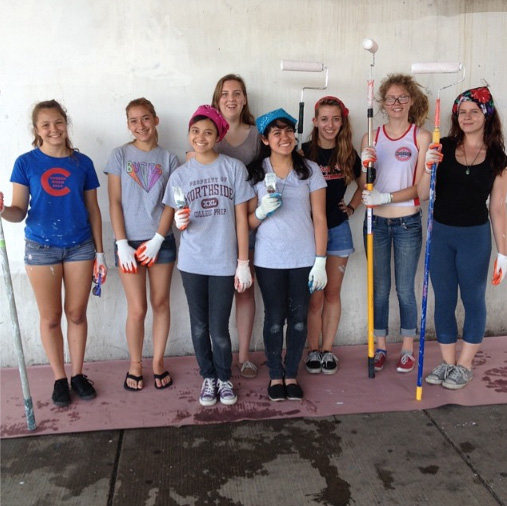 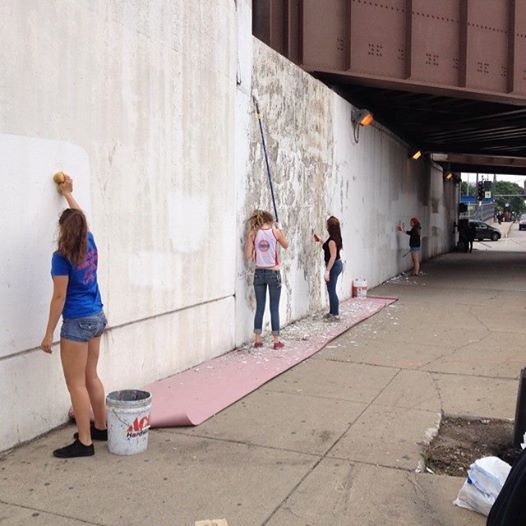 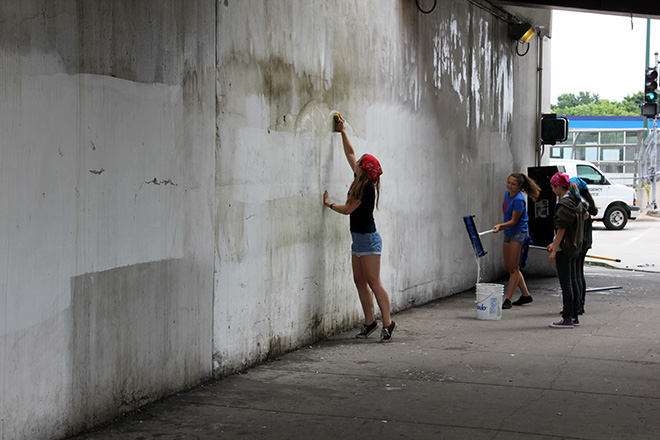 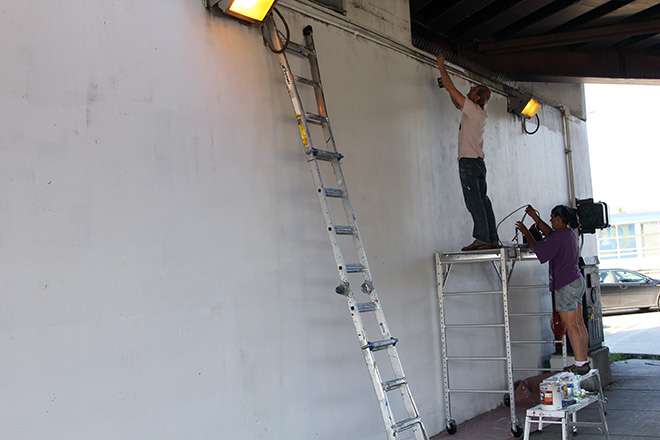 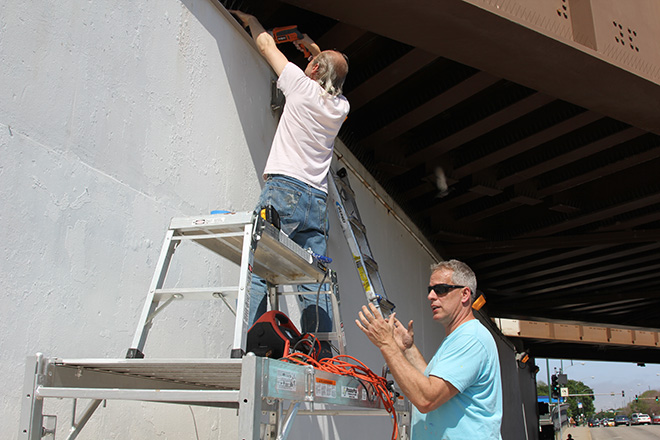 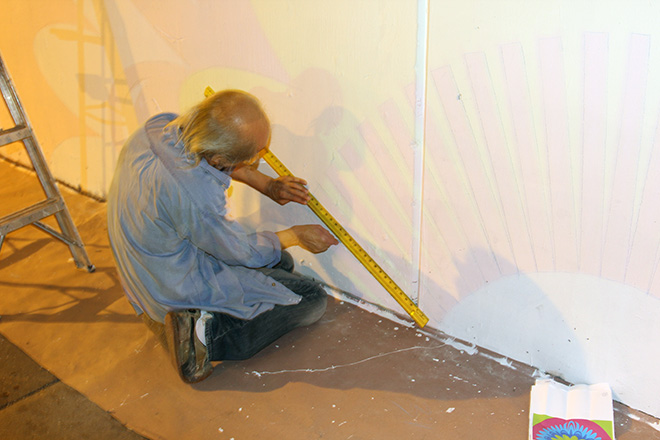 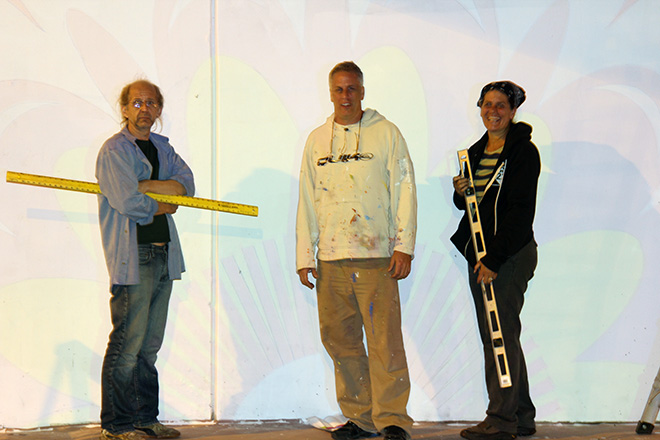 Jerry, Artist Tony Passero and Cyd Pose for a Quick Picture During a Break in Sketching 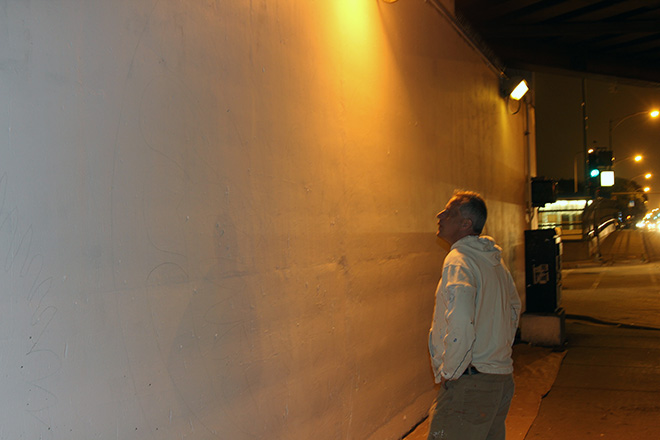 Artist Tony Passero Thinking About How Best to Adjust the Sketch