Tony Passero is a contemporary mixed media artist and muralist, who not only paints on traditional canvas but also uses a wide variety of found random objects (such as abandoned furniture, discarded doors, scrapped street signs, etc.) and unique surfaces (metal, wood, fabric, etc.) as the base for his works.

His work is often executed in series or set formats as he explores themes through repetition. The majority of his artwork is centered on a unique mash up of a Latin, Creole and Tribal tones blended with a bit of a linear organic cubist and expressionist styles.

His paintings are typically covered with patterns, text and codes of all kinds including words, letters, numerals, ephemera, pictograms and symbols. His output has a textured quality as a result of building up of layers from the various mediums he uses (ink, oil, acrylic, custom dyes, etc.) and the various devices he uses to apply the mediums.

With each new theme undertaking, Passero makes a point of exploring different and new painting techniques to aesthetically complete and compliment the theme of each project he engages.

From a public and commissioned art perspective, Passero has conceived installations and painted murals at a wide variety of locations such as:

The Mane Event Mural at the Hawthorne Race Course in Cicero, IL

The Spin Cycles Panel Installation at the 6 Corners Shopping District

The Whoot Mural on Belmont Avenue in Chicago’s Avondale

The Positive Babel Mural at the Irving Park Metra Station

He has also participated as one of the lead artists on the Addison and Avondale Mural, Chicago Police Memorial Mural on Montrose Avenue, the Uptown Jazz Mural at the Chicago Transit Authority (CTA) Red Line exit and oversaw the Restoration of the first mural on Chicago Public Library Mural at the Bezazian Branch. 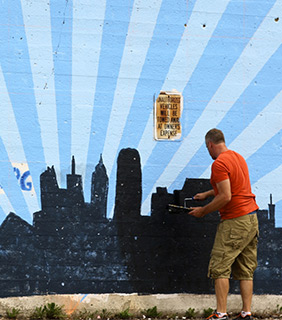 Tony Passero (born May 19, 1967) is an American contemporary artist, author and filmmaker based out of Chicago, IL and Orlando FL.

Born in Chicago, Illinois, Tony Passero grew up on the city’s North side with his Irish mother, Sharon, Italian father, Vito, and his younger sister, Laurie.

He attended the Chicago public grade school, Scammon, and the Catholic high school, Gordon Technical, with no exposure to art or creative classes. He is an entirely self-taught artist, having never attended an art school or received any formal training.

An avid reader and viewer of cinema he was heavily influenced by authors and filmmakers and begin to keep detailed journals and sketchbooks around the age of 12.

He splits his creative time between his Chicago and Orlando based studios treasuring his downtime with his wife Shannon and their two children Sophia and Nico.

Career wise Tony Passero started and founded the Advertising Agency TribeAgency in 1998 and has been lead creative director and CEO of this company over the last 20 years employing many  leading designers, technologists and strategists.

Passero is also a celebrated graphic designer in his professional career as Creative Director of TribeAgency. He has created work for Baxter, BP, Chicago Fire, Dreamworks, Sony Music, Manchester United, Major League Soccer, Chicago Gateway Green, Sears, Taco Bell along with many other local, national and international companies and brands.

Passero also takes his charitable commitment to the next level by sitting as a chair on the boards of a number of charities and community organizations such as the Arts Alive Chicago, Alderman’s Arts Advisory Committee, Independence Park Advisory Council, Foundation For A Better Life and the Northwest Arts Connection.