Sometimes no matter the approach to the ball, the kick takes an odd deflection.

While the Valspar Chicago Fire Jersey Mural was originally to be placed at a public school in the Little Village area of Chicago last year, repairs to the wall it was to go on prevented it from happening.

After a reset I worked with the Chicago Fire’s Adam Zastowny, Mary Moloney Sever and Jessica Yavitz to secure an alternative location to host the installation. We drafted a letter offering up to the work to various schools throughout the city. Almost immediately Dever Elementary school principal Jason Major reached out to me expressing interest to accept the work. Jason not only is principal at Dever but an engaged member of the Dunning community and he felt that not only the students would enjoy the work but residents would as well.

Jason put me in touch with Dever’s art teacher Amanda Zieman. We discussed ways we could incorporate the project into her students class work. Principal Major mentioned to me that Dever student population draws from a wide variety of cultures. I suggested to Amanda that since that soccer is an international game and Dever students come a wide variety of nationalities we could incorporate flags from various nations on the pots that where to be included to give the installation a living wall component.

Amanda jumped on this idea immediately and set to task coming up with a lesson plan that had her students discussing flag design and painting 28 pots inspired the flags from students nationalities.

My friend and fellow artist Cyd Smillie pulled the 22 jerseys selected to represent jerseys from throughout the Fire’s history out of storage and delivered them to the Dunning Library which is located right next to Dever Elementary. Head Librarian Melissa Kaszynski was kind of enough to store the jerseys as I was going to be arriving to do the install over the weekend and would not have access to the school.

After driving up from a project I have going on in Florida, I arrived on site for the install and got a big helping hand with the task on hand from John DeLeo, Joseph Kaput and Dan Pogorzelski working to measure out, place and install the jerseys. Later in the day fellow artist Jerry Rogowski came to join us which gave us the final push to get the installation complete in one long day.

Yes the kick takes an odd deflection but when you have team mates like Jason, Adam, Mary, Jessica, Cyd, Amanda, Melissa, John, Joe, Jerry, Dan and of course sponsor Valspar surrounding you its still pretty easy to get the goal.

Naturally the real stars of our team of the Dever Elementary students that painted the pots in their unique styles. 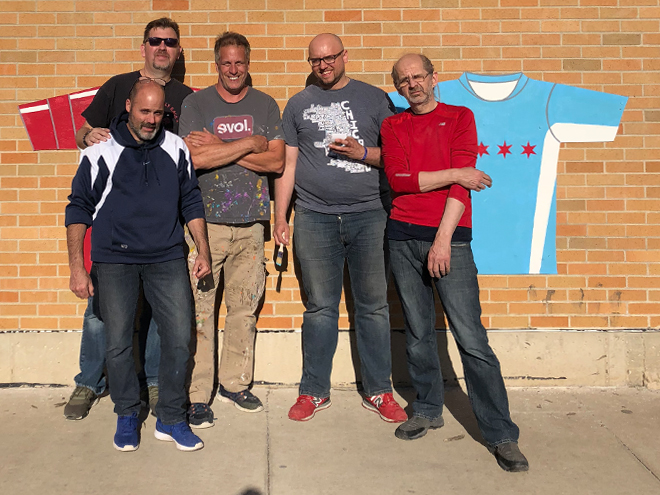 Big shout out to John DeLeo, Joe Kaput, Jerry Rogowski and Dan Pogorzelski who donated their time to help me install the elements of the Fire Jersey mural. 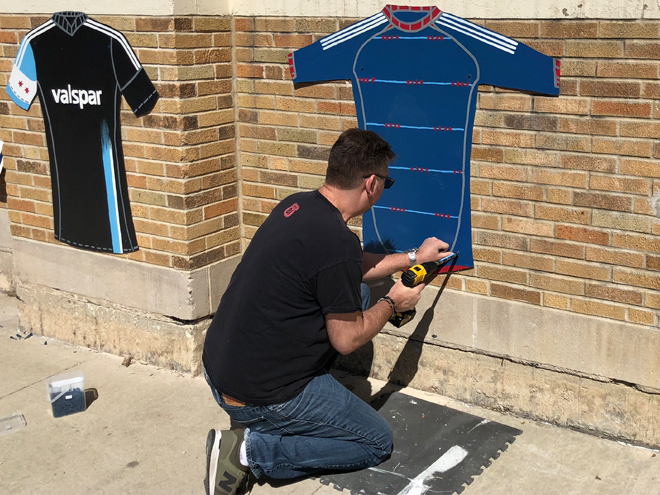 Joe Kaput installing one of the jerseys 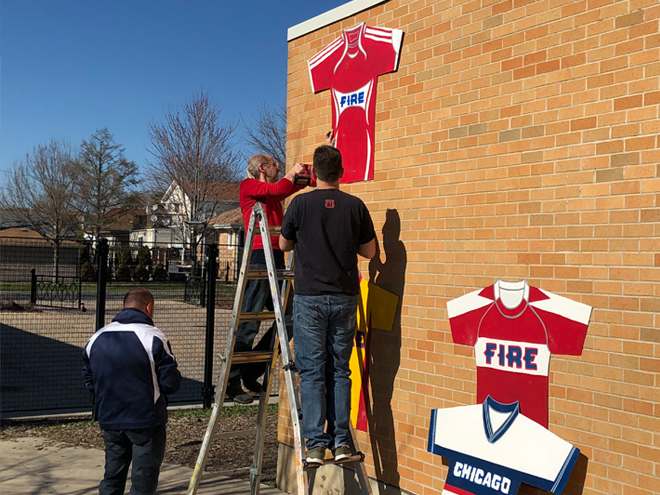 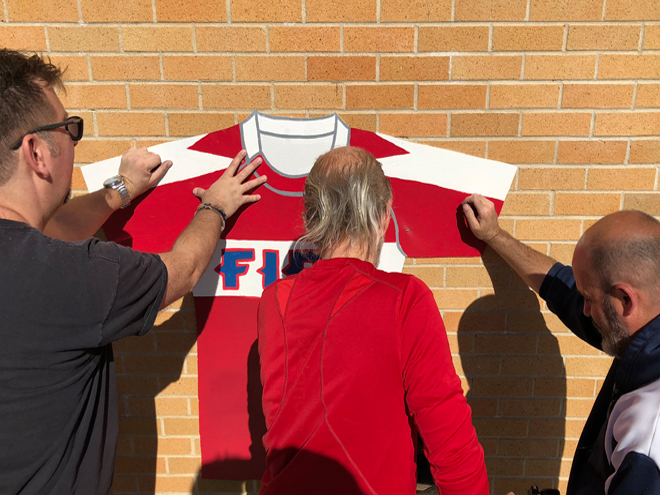 Joe Kaput, Jerry Rogowski and John DeLeo working to get one of the jerseys installed 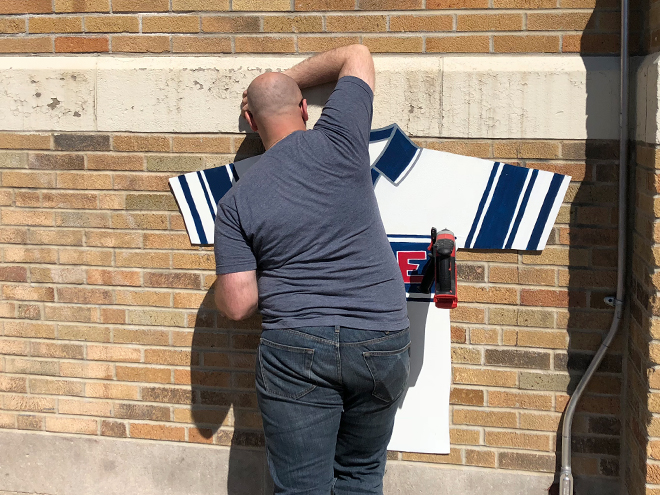 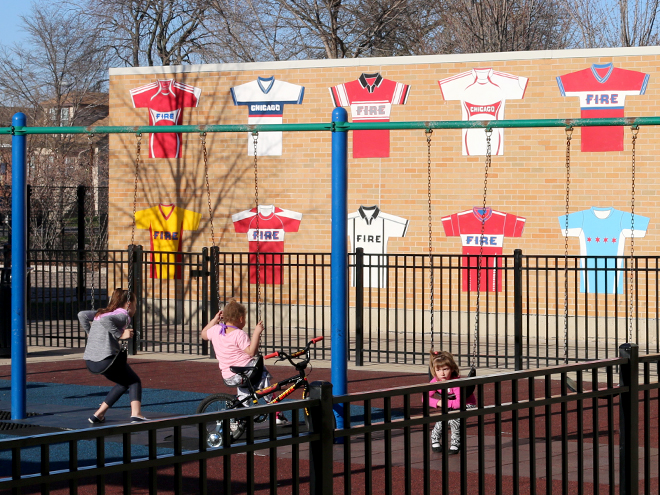 View of the main wall from the swing set 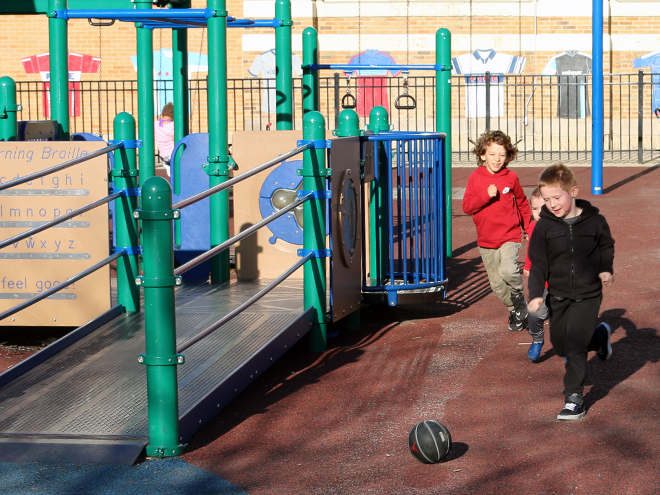 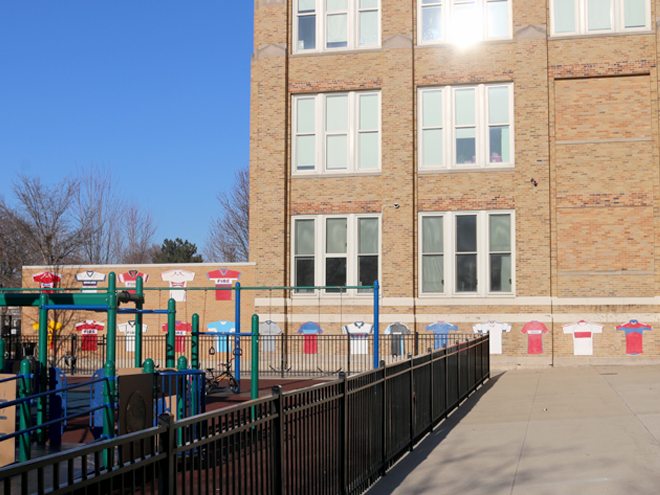 View from the street at end of install day 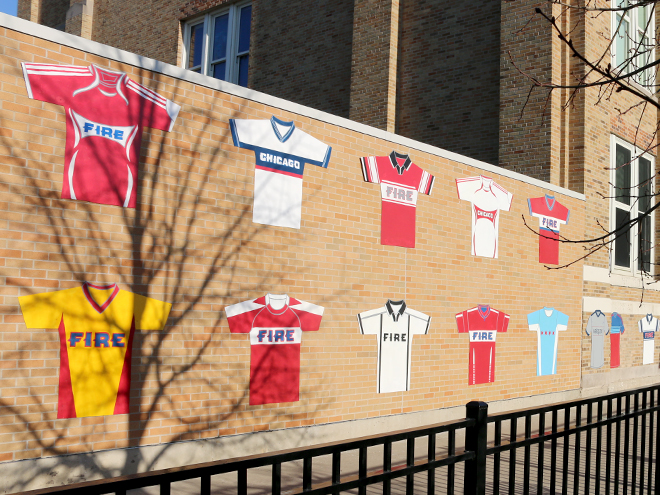