Day 5 at the CrossCuts Mural located on Addison Avenue between the Kennedy Expressway exit ramp and Avondale Avenue.

After wrapping late last night I worked into the evening on sketching and a revising a design solution for the two side panels that wrap the wall at the Kennedy exit.

Shannon worked deep into the night to execute scaled mockups on the computer and to kick out accurate printouts so they would be ready foist thing in the morning.

I arrived on site and got set-up for the smaller crew that was coming out to move things forward today.

Juan Carlos who has shown up every day right on time and ready to work set to task on finishing panel 2.

Annalis DeLaCruz arrived and given her steady hand I had here start working on fine detailing starting on the left side of the wall.

She was matched by Maribeth Brewer, who came out to the wall for the first time today, and began detailing from the right side of the wall.

I was delighted that Shawn Cassera finally go a break from work to join in on the project as he is a really solid young emerging artist. I set Shawn to work on finishing off the top of Panel 9 and cutting in all the pipes in that section of the wall.

Jerry Rogowski and I then went over to the expressway exit portion of the wall to plot and plan the sketching of the new designs for panels 10 and 11. We concentrated on sketching Panel 11.

Piotr Wolodkowicz and his daughter Christine arrived a bit later in the afternoon and I left Jerry to sketch Panel 10 while I discussed the work required on the low wrap portion of panel 1 that borders Avondale Avenue. It was really see her and her dad working side by side on getting this panel stared.

Jerry and I finished off the Sketching of Panels 10 and 11 and began to do early color blocking.

Annalis DeLaCruz asked a friend of hers to provide lunch and broke off to pick it up. We were soon enjoying some delicious Cubano Sandwiches and Empandas form Señor Pan Cuban cafe. Delicious food be sure to check the restaurant out and thank them for their gracious gift in support of the artists working on site.

After lunch we had a visit from Alderman John Arena and wife Jill as well as his lovely mother. They were out at a family event but took the time to stop by do some quick color touch up and show their support by thanking each and every artist on site.

Lizzette Aguilara and Jonathan Herrera arrived and I had them begin color blocking on panel 9.

Jerry Rogowski and I headed across the street to do an overall assessment of the long range view of the wall and caught a sizing problem on panel 8. Jerry came up with an excellent solution and used his artistic acumen to save the day.

In the late afternoon Lizzette, Jonathan, Maribeth and Juan Carlos ended their shift.

A bit later Piotr and Christine Wolodkowicz needed their day leaving behind an excellent start to panel 1.

Shawn switched out to working on Panel 10 and when Siobhan Kealey checked in for her evening shift I had her focus on outlining Panel 1 and then moving over to color blocking Panel 9.

Jerry and I began working our way across the top entire length of the wall to cut in all conduit and drip edges. We also cut installed the final two pieces of drip edges we were not able to get on Day 1.

Late in the evening Jerry departed and Jan Wiktor Soroko checked in for some late night work. I had him roll in the remaining color on panel 1 and panel 9 before he left for the evening.

Shawn and Siobhan wrapped around 9:30 with the panel 10 complete.

After packing up I stayed behind to take notes on what needs to be accomplished for the final push for the competition of the mural.

Tomorrow Shannon is going to step in the morning to act as project lead working on fine detailing so I can take care of some of my day gig responsibilities for my clients. 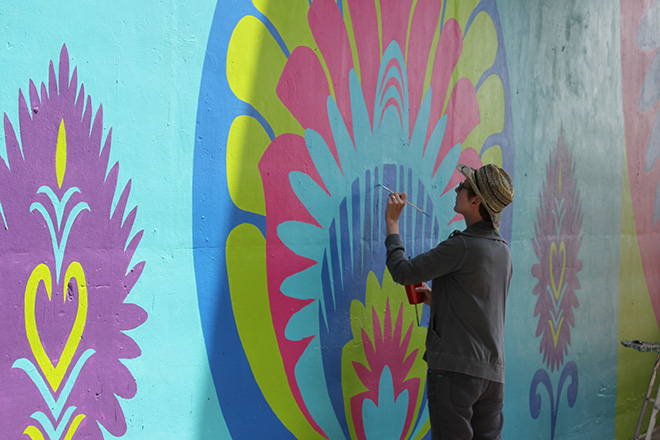 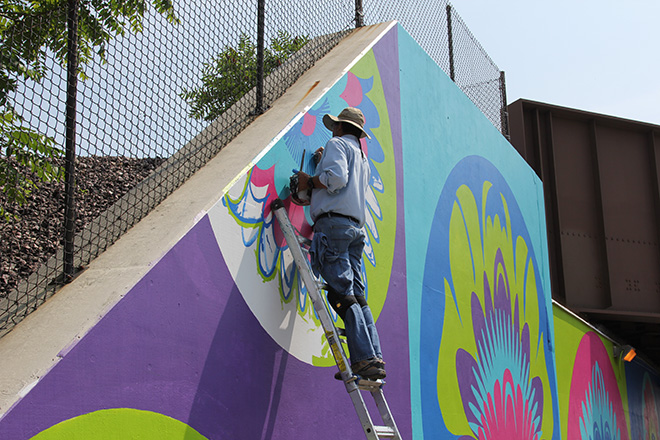 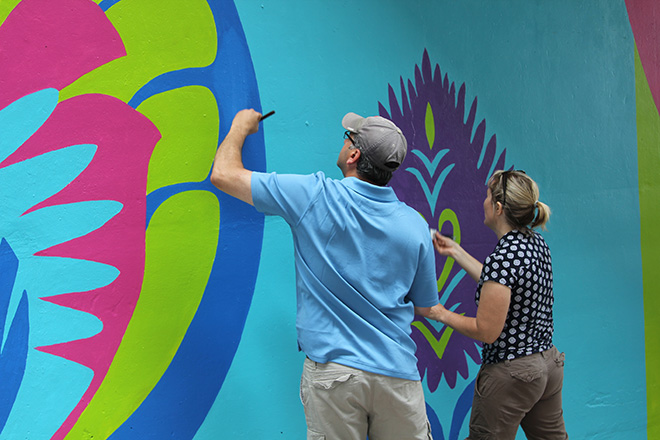 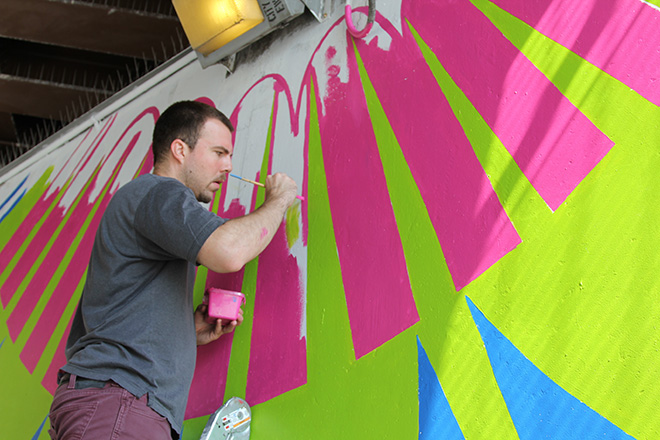 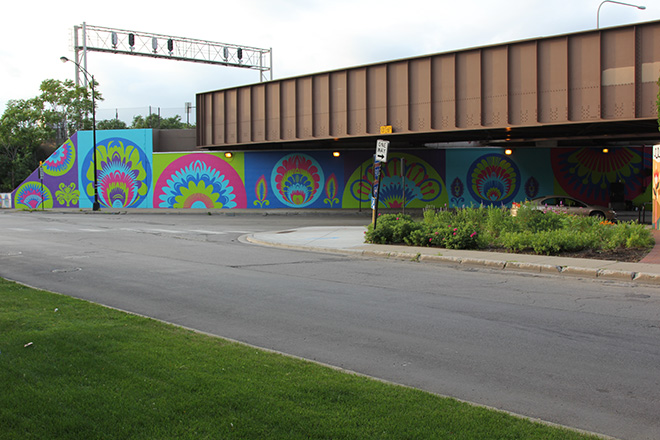 Day 5 View from Across Avondale 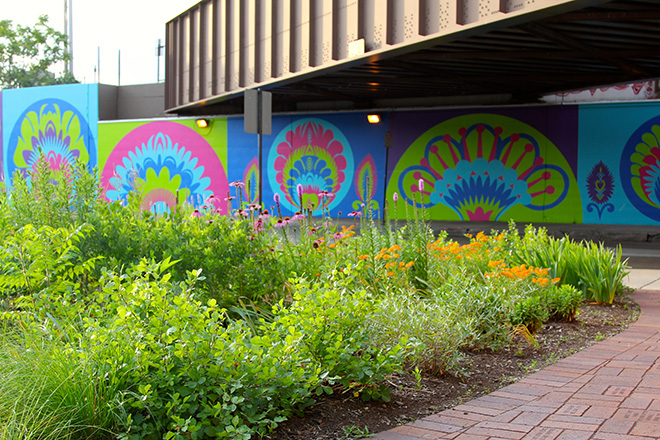