Day 2 at the CrossCuts Mural located on Addison Avenue between the Kennedy Expressway exit ramp and Avondale Avenue.

The Addison and Avondale Mural and Garden Committee asked me to open the painting of the piece to local artists so they can participate in the execution of the mural. After having some meetings and a bunch of planing I decided to have the artists come out in 3 shifts of four hours.

Shannon Kemp Passero really aided me in coordinating schedules which was huge this many participants things can get out of hand real quick.

I looked to my steady mural and fellow artists partners Cyd Smillie and Jerry Rogowski to step in as shift leads.

Jerry, Cyd and I have worked on many projects together and as a result we have developed a great work method and flow. Can be pretty funny as we often just proceed through a mural with an uncanny and often unspoken rhythm.

Both Cyd and Jerry are mega talented and giving in their artistic chops it make it very easy to “riff” with them and we make a nice “power trio” when working in concert.

Cyd, Shannon and I met up with the first wave of the team of artists early in the morning and cracked open the paint and got to work with early outlining and rough in.

Cyd focused some of her Arts Alive Chicago interns on Panel 2, Juan Carlos Frias and Jonathan Herrera started on Panel 3 while Shannon and I focused on Panel 3.

Juan Carlos and is a local artist who played a big part in the execution of the Rafael Lopez Mural across Addison he has a fine technique and is an excellent craftsman and a real joy to work with. This is the first time I have worked with young Jonathan Herrera but he had a great attitude and slotted right in. He is a very talented young artist back home for his summer break in attending school in Minnesota and bald to have him on our team.

At mid morning we had a visit from Polvision reporter and anchor Sergiusz Zgrzebski who came to do a piece on the mural and interview with Addison and Avondale Garden and Mural Committee Member Anna Zolkowski Sobor and some of the onsite artists. Anna constantly works and volunteers around the clock to make her community a better place and deserves all the camera time she can get as a result as she is a real star.

Sergiusz also deserves some huge credit as he always makes a point to do feature stories on community and arts based events. He has a very infectious and charismatic approach in his interview style which puts everyone at ease and makes for some solid reporting. Everyone working to make this mural happen is very grateful for his coverage as it increases our exposure on what we are doing to improve our shared neighborhoods.

Juan Carlos and Jonathan continued on through the afternoon shift with Shannon, Cyd and I and we were soon joined by the lovely and talented Maria Guasso. Maria was also instrumental in the execution of the Lopez mural and does some amazing work with the students at Blaine Elementary all on a volunteer basis.

Staff member Shelby Bremer from the office of State Representative Jaime M. Andrade, Jr came out with lunch for the artists. There was so much food it lasted through all threes shifts. Thank you for your generosity Mr. Andrade and Shelby.

By mid afternoon we had basic outlines in and started color filling on panels 2 through 4 but a rain started to fall so we quickly moved our equipment under the shelter of the underpass and turned our attention to panel 6 which was under cover.

Stepped back a moment when I saw Juan Carlos, Maria and young Jonathan all working together and smiled as I noticed that here were three latino artists all working together on a mural that was designed to incorporate elements from the various cultures found in the community.

By early evening we had panels 2, 3, 4 and 6 outlined and mostly color blocked and Cyd, Shannon, Maria, Jonathan and Juan Carlos left for the day leaving behind an outstanding start as the gang for the third shift started to arrive.

My main man Jerry Rogowski and I took stock as we had three new artist, Piotr Wolodkowicz, Daniel Pogorzelski and Jan Wiktor Soroko working with us for the first time.

Piotr Wolodkowicz is a very talented artist who is also the director of Polish Arts Club of Chicago so we knew he would be confident and we assigned him to clean up and detail work on Panel 1 and he quickly set to task.

Daniel Pogorzelski is a local author and neighborhood historian, his third book is actually about the community of Avondale and Chicago’s Polish Village is coming out later this month. Daniel has a deep knowledge of Chicago history and seems to know just about everyone that passes by on a first name basis.

Jan Wiktor Soroko heads up the non-profit multikulti and as such orchestrates and produces a multitude of cultural and political events. An incredibly smart and sharp guy who often is behind the scenes on arts based stuff.

Both Jan and Daniel admitted to Jerry and I that they were not ‘Fine Artists” per see so we assigned them to color filling on Panel 6. It was nice to see Jan Wiktor to have a chance be hands on and get a little bit lost in the process of painting he is always so serious and I actually caught him smiling.

After assignments , Jerry jumped into starting on one of the most difficult panels (Panel 5) in the mural and I circled back to panel 4 now that the rain stopped.

The rain came again Peter and I had to break off and move inside. I took a break to shoot some photos and had another silent smile as I noticed
aside from myself the entire third shift was composed of first generation Poles and now Poland was well represented in the mural by some very talented and generous guys.

We wrapped and packed up around 10 PM and all in all a pretty incredible paint day in the mural as you will see in the following pictures. 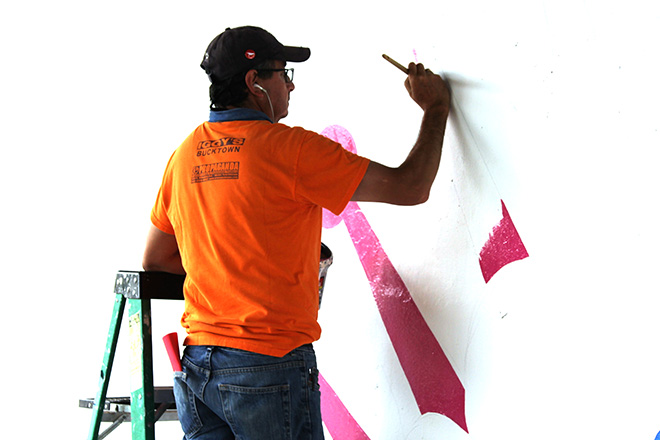 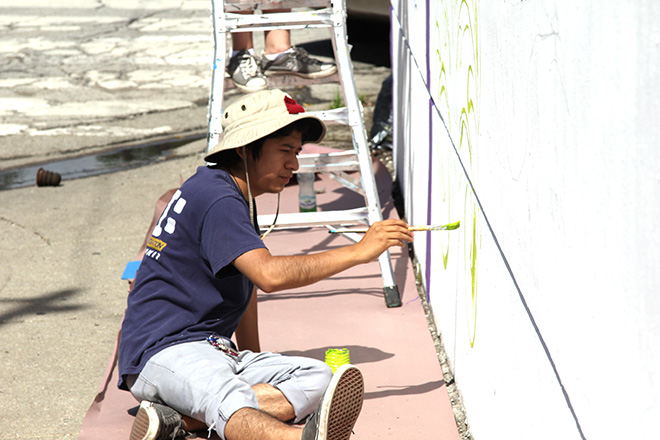 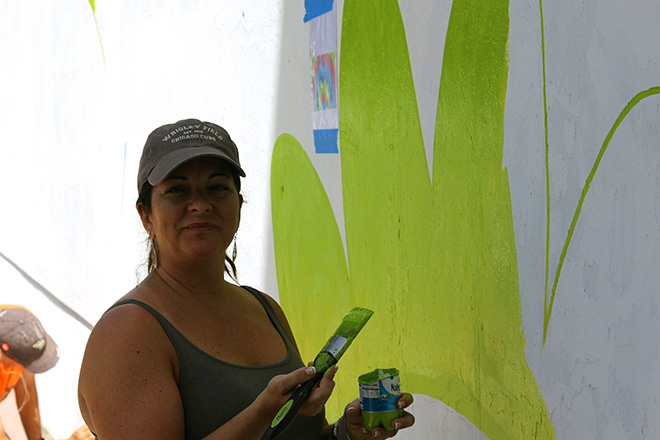 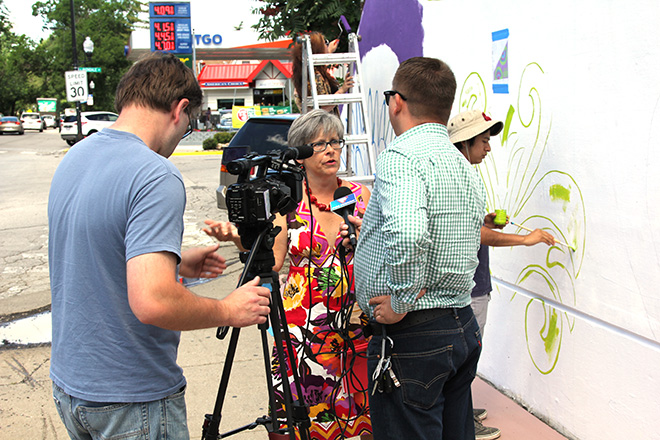 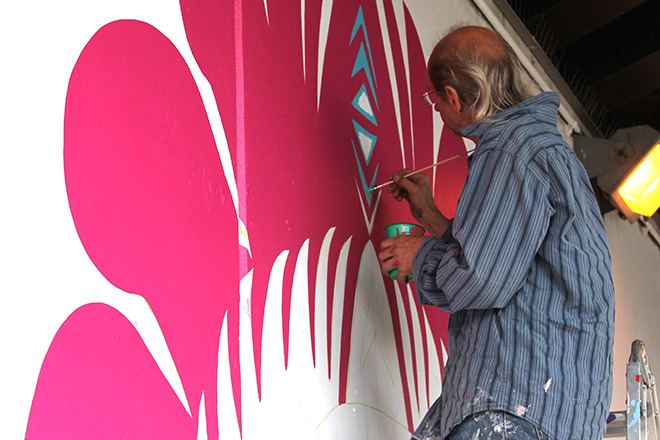 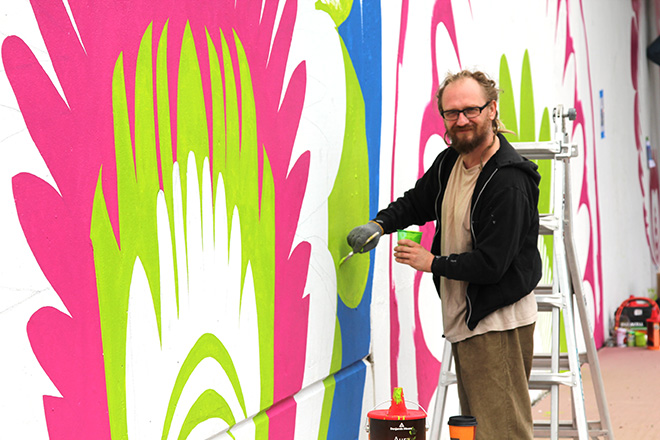 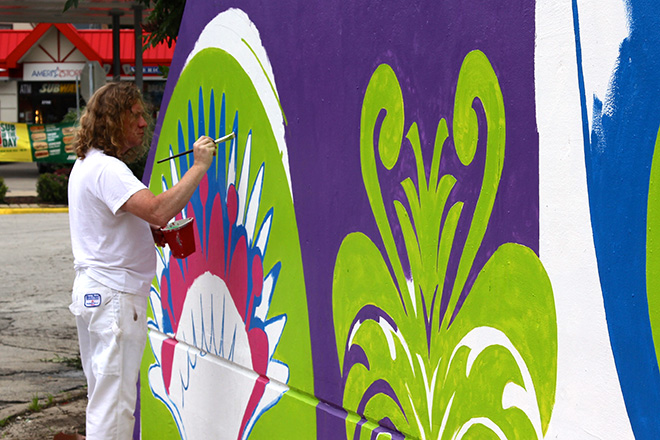 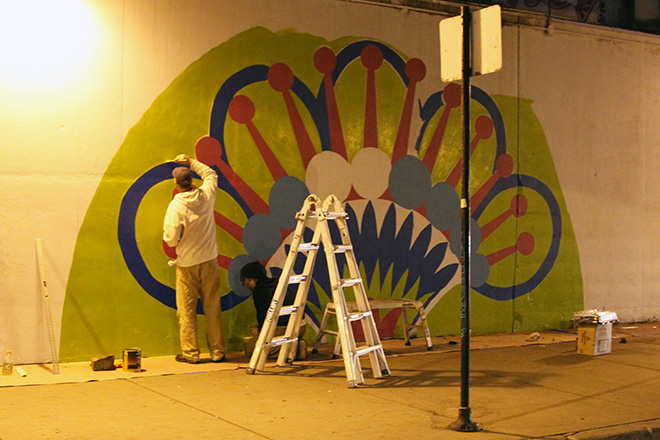 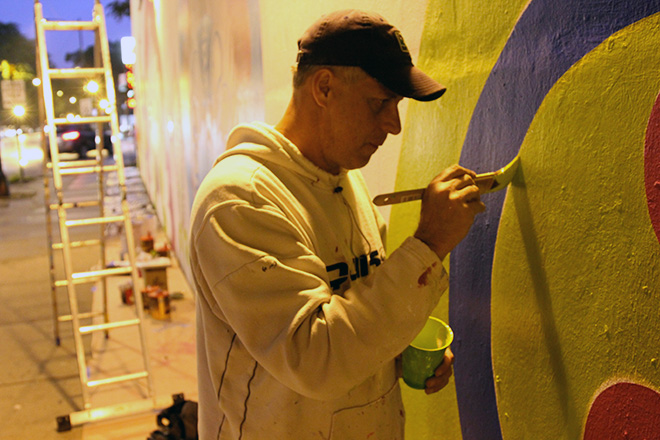 Artist Tony Passero Getting into the Details 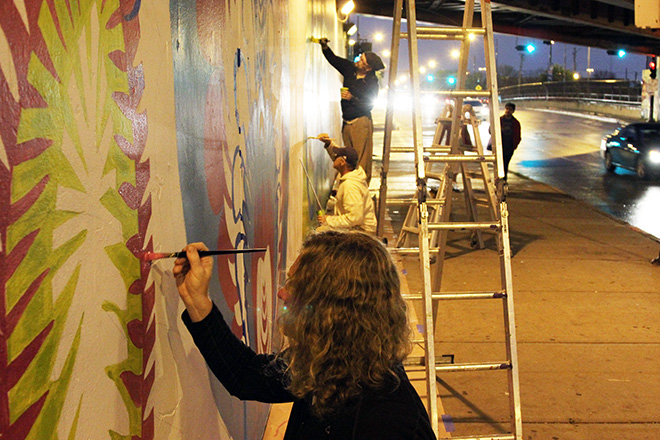 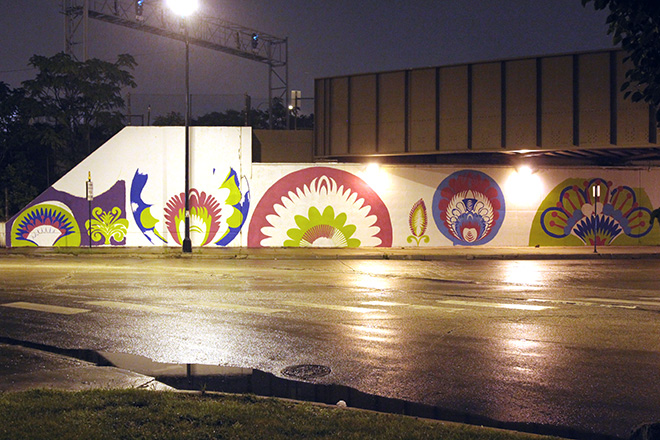